How would you choose a shelter dog? What do I have to consider besides the sex of the dog? My dog is a male, and [we] would like to have another male, but since i found out that another male would be bad idea, we are now thinking what traits should we search in a dog. I ask about a breed, because you kind of know what traits the breed has…

We could adopt a purebred dog as we will likely know how she will behave… or if we decide to have a mixed-breed [sic], how should we pick one? Is there any way we can know if this dog will be a good companion for our Dobie?

Also, if we adopt a purebred dog, what breed has a similar way of living as a Dobie? Because if i put, for example, a basset hound with a doberman, I think it might not be a good combination….. What would you recommend? 🙂

Thanks for the question.

While I understand that breeds may have some commonalities, I am in the camp that they are just generalities. Having spoken to just about every breed I can think of, I cannot say that every time I’ve spoken to a specific breed, they have all the same traits. I’m Jewish, (by nationality) for instance. So, It would be like saying, “All Jewish people have this trait.”

Their upbringing, genealogical line, and socialization are a tremendous influence, as well. 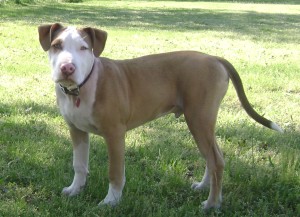 How many times have you heard that Pit Bulls are dangerous dogs? Well, they can be if they are taught to be that way, (either intentionally or unintentionally) so can chihuahuas. It’s just that Pit Bulls are strong so a lot of people get them to abuse in that way. The same was said about Dobermans in the 80s. And German Shepards before that. And Rottweillers somewhere in there as well. Pit Bulls are just this generation’s ‘mean dog’. However, if we are talking about breed traits, Pit Bulls are one of the most gentle, family-oriented dogs around. So you can’t just rely on breed and have the expectation that you know what you will get.

I am also in the camp that the same can be said about pure bred dogs. I cannot tell you how often I have had clients call me and say, “I got a pure bred because I thought I would have no problems, but … I’m having this problem.” They may not have all the same problems of a shelter dog, but problems nonetheless. For one thing, you can never be sure, even with reputable breeders, how the animals were treated, or if there were other factors involved.

I spoke with one purebred Doberman who was having aggression issues with dogs. It turned out to be a past life issue! She got much better after the conversation, but my point is, there are just too many variables to think that you know what you are going to get with purebreds. (Besides, purebreds generally have more health issues. Check out this video:)

That said, if you do want a specific breed, let’s tackle that. There are rescue organizations that specialize in nearly every type of breed. So check your area for it when and if you decide on a specific breed. That way, you are both getting your breed, and saving a life.

Whooo. Okay, let’s move onto rescue organizations. (Sorry you asked, now, aren’t you.) 😉 Before I forget, be aware that there are probably more rescue organizations in your area than you are aware of. Most people think it’s just the Humane Society, because they are the most well known. But, for instance, where I live, we have tons of them, that I would never have known about except for that I have either spoken to some of their rescues, or my clients tell me where they got their pups. (We even have one organization who goes down to Baja, Mexico, rescues dogs and brings them back to San Diego. It’s an awesome organization.)

Ok. I agree with possibly getting a female. Again, however, this is not a hard core guarantee. They say that about cats, too, and I live in testosterone valley! Of course, when we brought our youngest into the house, he was just a baby, So, I don’t know how old your guy is, but you might consider getting a puppy, if you can handle it. Depending on your pup’s personality he or she might become very maternal or paternal towards the puppy. Not a guarantee, but a thought. 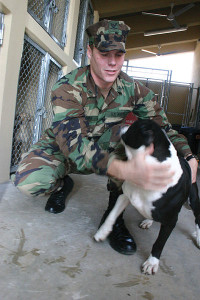 Furthermore, I’m not completely certain, but I think … I think … that a lot of rescue organizations might have the option of you allowing the dogs to meet, so they know they get along. I’m not sure about this, but I seem to remember a client telling me this about when she got a dog, so it’s worth at least asking. Hey, look. They want your dog to get along with anyone you adopt. They want that adoption to be forever, too.

The last little thing I will mention is, I don’t know if you’ve ever adopted a dog from a shelter before or not, but once you do, you will probably never again want to buy a pure bred dog. The level of satisfaction you have for saving a life of someone who has had such a terrible one is indescribable. I spoke with one dog in spirit, we were talking about adoption. He said, in effect, “Humans adopt us and take care of our physical needs. In return, we take care of their spiritual needs.” I found this statement so profound, and of course, doing what I do for a living, I certainly know it to be true.

You will never have a more rewarding experience or relationship with an animal than one to whom you are adopting because you want to do it for them, rather than doing it for what you will get out of the deal. Ironically, in return, they will give you so much back.

I’m so glad you asked the question. I hope you will post back and let us know what you decided and all about your new little addition to the family. I have clients who have pairs or packs of dogs that go from the large to small. They play, they love, the large ones seem to instinctively have an understanding about the size and how to be careful when playing.

I think go to the rescue, and allow yourself to let go of thinking so hard about it. Meet some dogs, find the one that chooses you, and check to see that she or he will get along with your pup, through either talking to the volunteers, or doing a meet and greet with your dog, then the universe will have put together the perfect family. 🙂

Good luck with it, sweetie. Can’t wait to hear about your new family member. 🙂

—
Lisa Larson is an animal communicator and reiki master. You can find her at http://pawstalk.net